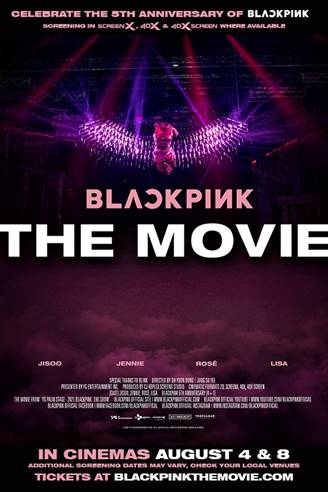 The girl group beloved by the world, ‘BLACKPINK’ celebrates the 5th anniversary of their debut with the release of BLACKPINK THE MOVIE, it is also a special gift for ‘BLINK’—BLACKPINK’s beloved fandom—to revisit old memories and enjoy the passionate performances in the festive spirit. BLACKPINK—consisting of JISOO, JENNIE, ROSÉ, and LISA—has been growing explosively ever since they first stepped out into the world on August 8th, 2016, along with its fandom ‘BLINK.’ As hectic as the past five years have been, all the memories, delights on the stage, and their shining moments have been wrapped ‘like a gift for all the fans’ in BLACKPINK THE MOVIE. The film consists of diverse sequences focused on each and every member of BLACKPINK, some of which are: ‘The Room of Memories’; a segment on sharing five years of memories since BLACKPINK’s debut, ‘Beauty’; compelling shots of all four members with their distinct characteristics, ’Exclusive Interviews’; a message for the fans. Furthermore, BLACKPINK’s distinctive stages transcending nationality and gender that captivated the world with outstanding performances fill the screen with a maximized sense of presence. ‘THE SHOW’ (2021), ‘IN YOUR AREA’ (2018), and a dozen more hit songs from BLACKPINK will be unfolded on the screens to provide the global fans with a touching experience as though they are actually at fan meeting events and live concerts.